Bluatschink in concert at KOMMA 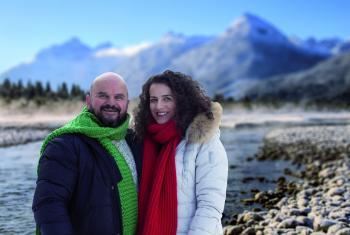 TONI KNITTEL – the songwriter and the mythical creature

The Bluatschink is a mythical creature from the Lech valley which is said to feed on small children. But already in 1990, Toni Knittel has rechanneled the bugbear into an environment lawyer that has been watching over the river Lech ever since.
For his song „HaHaHa-HiHi“, Toni picks out laughing as the central theme, since it is a well-known and still true saying that laughing is still the best medicine of all. However, Toni chooses the topics of his songs deliberately in a way that they deal with a kid's world: friendship, solidarity and family are in the centre of his songs. Apart from that, weired characters are a must in every Bluatschink show. The knights, for example, are not heroic warriors but rather clumsy,  dragons are not terrifying monsters but funny and they best friends. And unicorns are not only pink and glittering but rather chubby almost looking like rhinos!