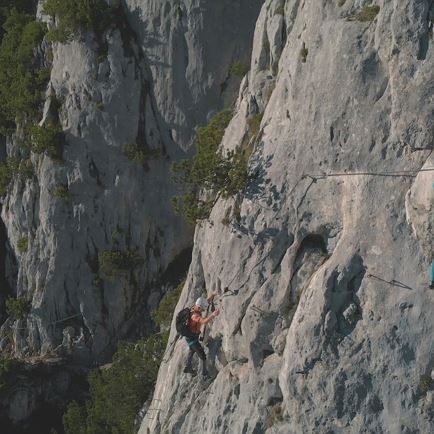 The s'Schuastagangl is the best-known via ferrata on the Waidringer Steinplatte, which was created in the difficulties C/D and impresses with wide panoramas, impressive low views and a summit ascent at 1,848 m above sea level.
The via ferrata is secured throughout with clamps and ropes, although the distances between the clamps are somewhat wider in places. The natural rock conditions must be used. After the entry passage (A/B), the route goes up via the so-called Himmelsleiter (B/C) and clamps. As you continue, flatter and steeper passages and steps alternate (A-C) before you reach a gorge. Here, not only the massive rock tower standing in front of you is impressive, but also the magnificent panorama. The easier variant leads through the gorge. For those who prefer airy steps over brackets and wide, deep views, the circumnavigation of the rock tower via the "Knieschloderer" (D) offers a more demanding variant that leads back to the normal route via a rope bridge. Via partly steeper ascents and ramps (B-D) you reach the exit of the via ferrata on the plateau of the Steinplatte and the summit cross at 1,848 m above sea level.