The myth-enshrouded waterfall in Aschau

Route outline to the waterfall

Staring point is Spertental's Kneipp facilities in Aschau. From here the route proceeds right, to Unterer Grund. There is a toll gate at the start of the tarmac road along the stream. The waterfall on the right and the Falkensteinfelsen on the left provide you with insights into the beauty of this unique natural landscape, which has also been designated as a conservation area. 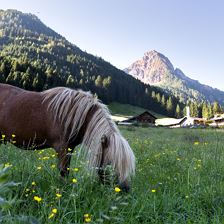 The hiking route is very suitable for families, easy to walk and for small children or even with a child’s pushchair is possible without any problems. Lots of resting opportunities with benches and...

The waterfall at the floor of the valley at Unterer Grund is said to conceal a heavy iron door, behind which there is a steep staircase to the former Falkenstein Castle.
At one time a beautiful, wild girl from Falkenstein came out of this door every year during the summer grazing season to meet the young shepherd who tended his animals here.
Each of the animals was selected by the herdsman and each time they came, the young girl brought with them an apron filled with precious treasures. But all this had to be kept very secret. No-one else could see the lovely young woman other than the shepherd. One day the young woman, who had chosen a particularly honest young man, was sad when she came to the meeting point. She had brought a valuable gift and said: ‘Today is the last time we will see one another; I will never be coming back’. What had happened? Well, the other shepherds noticed that their friend always received particularly nice gifts.
Out of curiosity, they followed him and also saw the girl. Now the secret was out and a lovely era ended as fast as it had begun. The wild young girl had the shepherds in a tizzy for a while. Otherwise peaceable cows grappled with one another with the weaker ones winning the tussles; this injured the pride of the shepherd whose cows had lost the battle.
The young woman also saw to it that the animals went crazy for a while and the shepherds had to go out and look for them in the rain and the cold, or long into the night. No major harm came to anyone. While such things were happening, the boys were sure that there was still a wild young lady, but she was never seen again.

Excursion destinations on the mountain