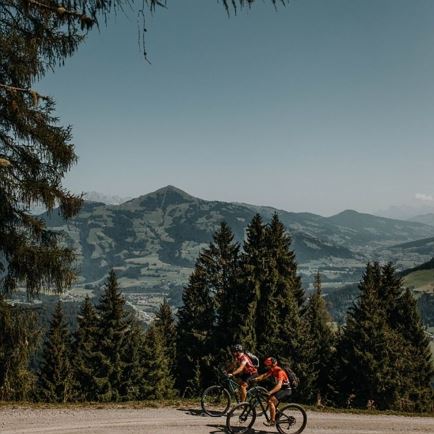 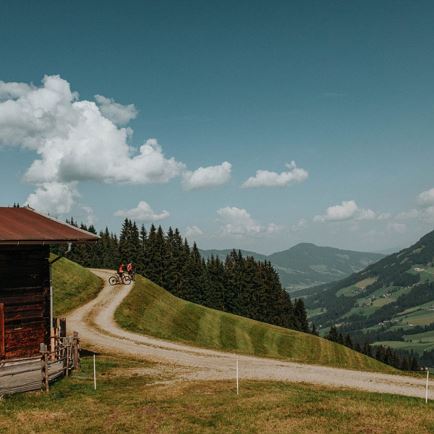 From the start, follow MTB Tour 229 in the direction of the Haag Alm. This leads along an asphalt road to the sunny plateau of the Penningberg.
There it is worth taking a detour to the tranquil Penninger Dörfl, where the 'Milchbuben' produce their own delicious soft cheese and sell it, among other delicacies, in the small farm shop.

MTB route 229 continues into the farthest point of the Penningberg. From there you change on to the forest road, which now leads you through the mountain forest along several bends to the Haag Alm. Once there, your legs have already achieved a lot of altitude - so a refreshment from the self-service cabinet situated right next to the farm buildings is well worth it.

With a renewed energy, you now tackle the descent into Kelchsau. When you reach the valley, turn right onto the Kelchsau main road. Pass the traditional Fuchswirt inn on the asphalt road until you reach the Steinerbrücke bridge on the left. After crossing the bridge, turn right and follow the steep mountain road, first on asphalt and then on gravel, up to Urschlahof (MTB 228).

Leaving the mountain farm behind you, the trail becomes increasingly steeper and more demanding, but you are rewarded with breathtaking views of the rear of Kelchsau with the peaks of the Kurzen and Langer Grund.

Now you pass the first alpine pastures - the Demmelshütten - and reach the Hintere Ölbankalm, still ascending. Now you head back out of the valley on the well-built alpine road. On a pleasant trail and without a steep incline, you pass the Vordere Ölbankalm and finally reach the Kälberalm turn-off. There you are once again on the signposted KAT Bike.

Now we face the last notable ascent of the stage. Past the Kälberalm, the forest road (MTB 294) continues uphill in a few bends. After about 800 m you reach a bend, where a signpost indicates the ‘push route’ to the Glanterer Kogel. There you carry or push your bike for about 60 metres through the forest. Then you saddle up again and finally reach the Glanterer Kogel.

Now a forest path leads downhill again. A short uphill section leads to the Kinzling Alm, another prominent point of the tour. From there, the trail continues for several kilometres back towards the valley (MTB 206). Shortly before reaching the valley floor, you have the option of turning left towards Käsealm Straubing. A detour to the attractive snack station is always worthwhile and well deserved after the kilometres covered.
Strengthened once again, you return to the original route and cycle down into the valley to the Jägerhäusl and from there pleasantly along the asphalt road to Westendorf.
The village, beautifully situated on a plateau, invites you to stroll around and linger awhile before you set off on the Brixental cycle path (No. 21) to the stage destination in Brixen.

On the Salvenberg Hopfgarten to the Rigi mountain inn