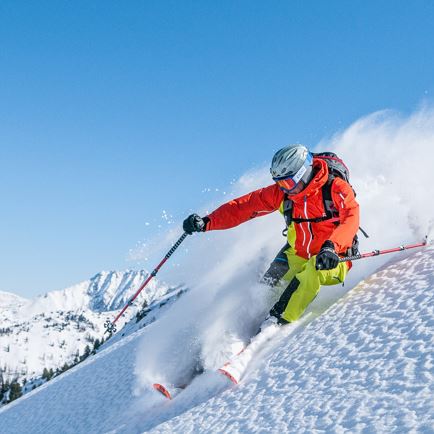 From the “Erlauer Brennhütte” parking lot along the forest trail (signposted Frommalm) uphill to the alpine pasture “Rechtseitbichlalm” where the trail forks. The trail in the ditch leads to the ski touring routes in “Frommgrund”, while the trail on the left leads to the “Schafsiedel”.  Walk up the snow-covered meadow just as you like. At the upper edge of the slope there is the alpine pasture “Neuhögenalm” which can be ignored. You rather walk up the right side until you get to the edge of the forest and a road. Now look out for a suitable spot to enter the light forest (do not follow the road to the right since it soon ends in a rather thick forest) through which you continue uphill to the western crest of “Schafsiedel”. Walk past the last trees along the initially wide crest, which is later getting narrow and shortly steep, via which you get to the final steep climb to the summit. Continue either on foot or if snow conditions allow through the south facing hollow up to the ridge and across it over flat terrain to “Schafsiedel” (2447m). The popular descent runs down short slopes or via the little valley below “Aleitenspitze” mountain to the “Neue Bamberger Hütte”. The alternative is to climb the neighbouring “Aleitenspitze” mountain (2449m) and take the north-facing downhill run into the little valley or south-east facing to the wide pastures of “Roßwildalm”