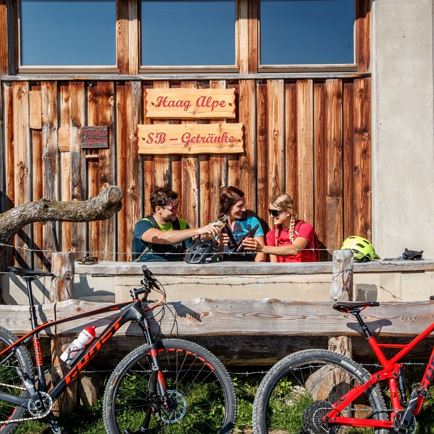 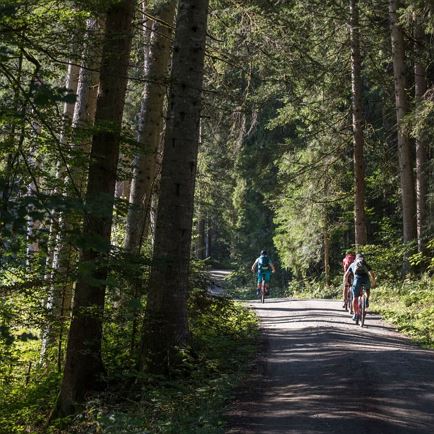 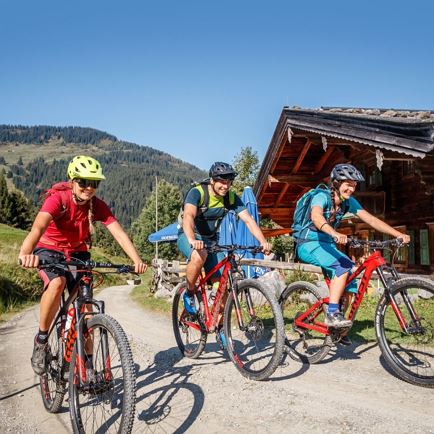 Starting point: free car park P3 at Wasserfeld in Hopfgarten. (after the Hopfgarten information office, continue along the main road in the direction of Kitzbühel, turn right after the railway underpass and go over the bridge).

From the Wasserfeld car park, the route leads along the road in the direction of Kelchsau and after only about 50 m, we turn right onto the little-used side road up to the sunny plateau of the Penningberg. The first kilometres lead comfortably on asphalt past the Hotel Leamwirt, the sports field and many beautiful old farms.
At the end of the valley, the surface changes to gravel. Far away from the black asphalt roads, the whirring of the coarse tyres falls silent, there is a smell of damp forest, and civilisation is far behind. Lonely, sometimes deep in the coniferous forest, sometimes with a magnificent view of the surrounding alpine pastures and gentle peaks, we continue to cycle towards the Haag Alm. Shortly before the alp, a clever farmer has set up a particularly cosy sunny spot in front of his stable. There, beer, shandy and Almdudler are waiting well chilled in the rustic water trough.
In winter, this part of the trail is a very popular toboggan run.
From the Haag Alm, a detour to the Trockenbachalm is also worthwhile for the particularly eager ones, from where they can reach the Feldalphorn on foot in just over an hour. This would be a good way to combine the bike tour with a great summit success!

The ride continues without much of an ascent to the Höhenbrandalm (not managed). From there we take the forest road down to Kelchsau. This mountain village was voted the most beautiful place in Tyrol in 2020.
After the bridge, we turn left back onto the asphalt road to Hopfgarten.
On the way back to the starting point, we will pass the Salvenaland leisure park with its bathing lake and large children's playground. There we can enjoy delicious ice cream creations on the spacious sun terrace before returning to the starting point at Wasserfeld.

Tour to the Choralpe in Westendorf