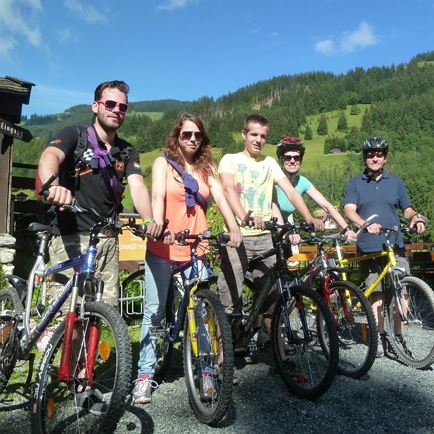 From Kirchberg head towards Reith and the Rerobichl. In Oberndorf take the side road towards Sperten/Weitau to St. Johann and after a short stretch on the B178 turn left to the ascent to Gasteig in the direction of Kössen. The route continues to Schwendt and after a short descent you reach Kössen. Follow the B176 across the country’s border and along the Tiroler Ache to Schleching. In Raiting, turn right onto the wonderful German Alpine road. After passing through Unterwössen and Oberwössen,  the Maserer Pass remains to be tackled.  After a short descent you reach Reit im Winkl. From there another winding descent, following the river "Lofer", towards Kössen. Shortly before Kössen you arrive at Erpfendorf’s main road which leads towards St. Johann. Just before Erpfendorf, turn onto the old provincial road towards St. Johann. In St. Johann cycle through the town centre and, via the Römerweg to Kitzbühel, return finally to Kirchberg.

Tour to the lakes in Kramsach